The Mule, starring Clint Eastwood in the leading role, is another excellent movie, directed by the veteran actor and director.

The story revolves around an elderly horticulturalist, who has been spending all his life working to provide for his family. He spent so much time working that he ended up neglecting his wife and his family. He suddenly hit on hard times, when he discovered that his house was going to be repossessed by the banks.

It so happened a few Mexican friends made him an offer to become a drug mule. After his first successful delivery, he got caught up in the web and landed into big sums of money, which he used to pay off his house, buy a new pick-up truck, provide for his grand daughter’s college education and assist his struggling daughter, who refused to speak to him because he neglected them. Now that he was in the money, he desperately wanted to make up to his family and terminally ill wife.

The Mexican drug cartels took advantage of his age and financial vulnerability and exploited him, but unfortunately, the long arm of the law caught up with him. His lawyer tried to protect him from being sentenced to prison, but to her amazement, he stood up in court and pleaded guilty because he acknowledged that he had done wrong. Through this movie, we are given a glimpse of how sophisticated the drug lords are to outwit the law to conduct their business.

Even the rich drug lords, with all their money and power are at risk of losing their lives, money, power and families from the enemy within and their rivals with one single bullet.

As Eastwood says goodbye to his family before he is escorted to the cells, he tells them, money could buy him anything but it couldn’t buy him time. A lesson for all of us.

Upon his release, we see him in the garden, happily doing what he enjoyed and loved doing most, even though it didn’t pay his bills. His face lights up when he sees the flowers bloom in his garden. His face lights up more than he ever did making all the easy money working as a mule for the dirty drug cartels. What is very clear from the movie is that the drug cartels have a strong foothold into most of the world’s major economies. They are so entrenched in our lives that they have literally become inseparable as tar is to the road, so much so, that not even the law can touch them.

The fact that we cannot control the supply shouldn’t be cause for despair. We can reduce demand by educating everyone in the world about the dangers of addiction and how to overcome it. We should teach our children, educators, parents and the whole of society. We must stop saying that it is someone else’s problem. If we each make a conscious decision to learn about addiction, we can play a significant role to reduce the scourge if we can’t get rid of it.

I felt Eastwood executed himself brilliantly. Pity that he and his movie was competing against other great movies, otherwise, he certainly would have been a candidate for an Oscar nomination.

For people, who are utterly naïve about the magnitude of the drug problem in the world and the challenges that they pose to governments, law enforcement agencies and to society, as a whole, I would urge them to see this brilliant movie. I thoroughly enjoyed it. 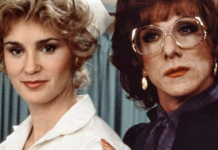 The Professor And The Mad Man