Can we all take a moment to acknowledge and appreciate Atlanta Hawks point guard Trae Young?

No one and I mean literally no one was talking about the Hawks before this matchup. Everyone had already made up their minds that the Knicks were going to take it following their stellar season. They have great players all round like former-MVP Derrick Rose, 2021 MIP Julius Randle, RJ Barret, Noel and the like. Their defense was considered top 5 in the NBA might I add.

The Knicks played great basketball throughout the entire year especially recently when Derrick Rose plays the point instead of Elfrid Payton (I know I tend to go on tangents).

However, the biggest story here is Trae Young. The 6’1 point guard absolutely annihilated this great New York team. He was disrespected by Knicks fans, he was drowned by anti-Trae chants, his hair was ridiculed and he was spat on but he made every single Knicks fan pay. Bogdanovic is no scrub neither is Capela or Lou Williams and and and but Trae served it up extra cold in the series. Averaging 29.2ppg and 9.8apg it’s clear Young was the MVP of the first round. Young took on that villain role, embraced it and made it his. Young an Derrick Rose made this series one of the best I’ve seen. 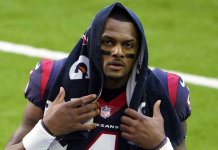